Video Lectures of This Reading

Literal roots of Istijrar are found in ‘Istajarra al Maal,’ (استجر المال) which means ‘to take merchandise by degrees’.

Definition: Istijrar is an arrangement in which someone keeps getting the articles of need from a shopkeeper from time to time, as and when needed, without any offer and acceptance or price bargain between the two.

There are differences among Sharia scholars on the permissibility of such an arrangement.

The general opinion of Shafi scholars is that Istijrar is not permissible, as it is a sale arrangement that does not fulfil some basic requirements of a valid sale contract.

A) If one considers that the sale takes place at the time when buyer takes the possession of merchandise, then the sale stands invalid as it is based  on an unknown price.

B) If the view taken is that actual sale takes place when the final accounts of the two parties are settled in the end, then there are again two Sharia problems:

(1) the buyer would have consumed the merchandise before the sale is executed; and, therefore,

(2) it would mean selling a non-existent merchandise. 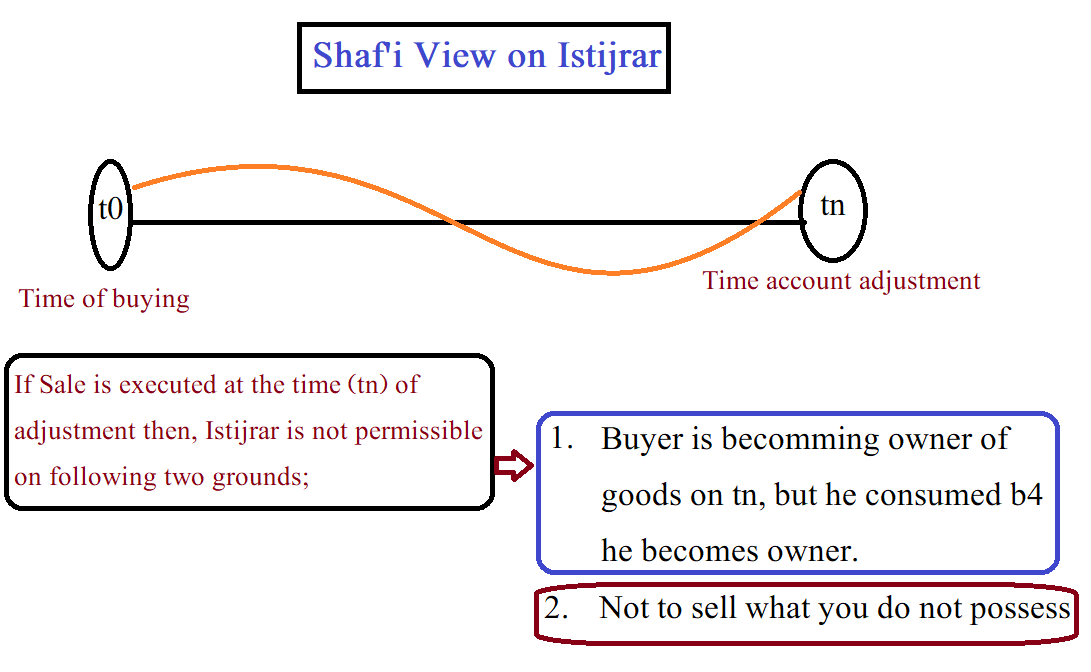 However, there is at least one notable exception within Shafi scholars. As mentioned by Allama Ramli in “Nihayatul Muhtaj Li rramli” and Allama Shurbeeni in “Mughni al Muhtaj” that Imam Ghazali has granted Istijrar on the basis of ‘Tasamuh’ (or juristic allowance).

Maliki are also of the view that Istijrar is not permissible. Their primary concern is the element of Jahl (ignorance) about the price, no matter it is paid in advance or in the end. This view is reported in “Muatta Imam Malik”.

Hanbalis are reported to have a conditional view on the permissibility of Istijrar. According to them, the two parties in such an arrangement agree on settlement price of the merchandise after the buyer has taken its possession and  also consumed it. Such a sale will only stand valid at the time of final price settlement, not at the time of buyer getting possession of the merchandise. However, this settlement price has to be the market price.  ( Moasooatul Fiqh al Islami )

This is actually the Hanafi school of thought that has granted fatwa on the permissibility of Istijrar primarily on the basis of ‘Istihsan’ and ‘Tasamuh’. This view is clearly stated in “ Durre Mukhtar Maa Ruddul Mukhtar ”.

Allama Ibn-e-Nujaim, in “Al Bahr ul Raiq ” also talks about the permissibility of ‘Bay al Istijrar’ in the following words:

“The type of sale that Hanafi scholars have permitted on grounds of ‘Tasamuh’ is the one in which people customarily get the articles of routine household needs, like pulses, salt, oil etc., from a shopkeeper without actually buying them at the time of taking possession. Then people trade these things after having used them. This is a correct arrangement and the trade of ‘non-existent’ is permissible in it”

What is the rationale of Istijrar?

Some scholars say that such an agreement between the two, at the end, will make it similar to a sale contract. But the problem with it is that, by the settlement time, buyer would have consumed all or most of the merchandise. How can a sale contract be executed on something that does not exist anymore?

Other scholars, in reply, have stated that such a sale is legitimate on the basis of Urf (common practice) and Istihsan. Yet, the difficulty is that, in such a case, buyer would be consuming things that haven’t entered his ownership and neither have they been traded. This is taken care of by the argument that because this use of merchandise by the buyer has been with the permission of seller, so consumption of merchandise before the settlement date is permissible.

Hanafi considers Istijrar as a sale contract .Hanafi response to ambiguity about the sale of a non-existent object is that the sale, in case of Istijrar, is actually of something from which the buyer has completely benefited. It is this benefit that has lead the object to a state of being non-existent at the end of the contract period.

The fundamental reason for prohibition of sale of non-existent object is the presence of Gharar, as sometimes seller is unable to provide the object of sale to the buyer due to its non-existence in the first instance. In case of Istijrar, however, not only the merchandise existed at the beginning of the contract period, but also seller has already passed the ownership of it to the buyer. This particular fact eliminates any possibility of Gharar in Istijrar.

In reply to the doubt of some scholars about the use of merchandise by the buyer without seller’s permission, Hanafi states that at the settlement time (when the sale stands valid) the validity of sale will be referred to the time of sale contract when buyer took the possession of merchandise. It will be considered that buyer has been using something he had already become owner of due to Istijrar contract.

Hanafi compares this with another situation in which a Ghasib (the oppressor غاصب)  is not allowed to benefit from the objects acquired by the way of oppression. But if he pays for the Daman (price) of these things, then he becomes the owner of it and time of ownership is then referred to the time of oppression through which he acquired the goods in question.

Hanafi’s argument is that if a Ghasib (غاصب) can become the owner of an unjustly acquired good, by paying for its price, then why should it not be the case for Istijrar? Not to forget, the seller’s permission to use the merchandise by way of Istijrar ensures that the buyer is free from any sin, unlike in case of Ghasb (غصب) whereby the Ghasib (غاصب) has also committed a sin.

There are two types of Istijrar:

A) Istijrar with deferred payment:

It is an arrangement in which someone keeps getting the articles of need from another person from time to time, as and when needed, without any offer and acceptance or price bargain between the two. The price is paid at the end when the contract is concluded and accounts are settled. The following points are important in such a type of Istijrar:

a) If the seller tells the buyer the selling price of merchandise, at the time of buyer getting possession of it, then the sale is valid every time buyer takes the possession. It is simply a case of deferred payment sale.

b) If the seller does not tell the buyer the price of merchandise, every time the buyer takes its possession, but the contracting parties understand that the sale is being executed at the market price, which is determined and known in a manner that there is no possibility of change in it or dispute, then the sale stands valid every time buyer takes possession of the merchandise.

B) Istijrar with advance payment:

It is an arrangement in which someone keeps getting the articles of need from another person from time to time, as and when needed, without any offer and acceptance or price bargain between the two. The price is paid in advance by the buyer to the seller and accounts are settled towards the end of the contract period. This type of Istijrar has two important Sharia aspects to ponder further on.

a) Will price of merchandise be known or unknown to the parties ?

b) what will be the rationale of advance payment made here?

a)Will price of merchandise be known or unknown to the parties ?

First possibility : One possibility is to consider this advance sum as the price-paid-in-advance. For such a possibility Sharia stipulates two conditions:

1) At the time of price payment, the exact kind of merchandise, its features and the quantity all must be known.

2) The merchandise must be of a type on which Salam or Istisna sales can also be executed and the Istijrar contract must have fulfilled the respective Sharia requirements of either of these two types of sales. Incidentally in practice,

Note: however, both of the above conditions are not observed in case of Istijrar.

Second possibility : The 2nd  possibility is to consider that the payment made by buyer to the seller is an Amana (deposit). This will mean that the seller can not consume this money for his own needs. It is, however, practically very difficult as sellers usually don’t keep it separate. Rather, all they do is to keep an account of this money while benefiting from its use.

Third possibility : Finally, one may consider this sum as a loan extended by buyer to the seller by virtue of which he can use this amount for his own purposes. But, the ambiguity here is that this will be a kind of loan that is conditional upon the future expected sale between the two parties. Such a condition is against the requirements of a loan contract.

b) Shaikh Usmani suggests a different rationale for this advance sum. In his view, such an amount should be considered “on account.”. In Fiqhi terms, an amount given “on account” is a special kind of loan that permits an adjoined sale. So, this is a loan with a sale condition introduced in it. Hanafi scholars consider such introduction of a condition permissible.