Video Lectures of This Reading

It is apparent that risk and uncertainties have been used interchangeably to denote potential losses arising from an exposure, e.g., in making a loan or murabahah.

In general, one can differentiate risks from uncertainties by saying that risks can be measured while uncertainties are not measurable. Risk in business is the possibility that an expected outcome does not materialize.  For  example,  a  construction  firm  expects  with  GDP  growth  at  5%  next  year projected a profit of $ 100 million, but the GDP contracted to -2% instead and the firm realized a $ 30 million loss. 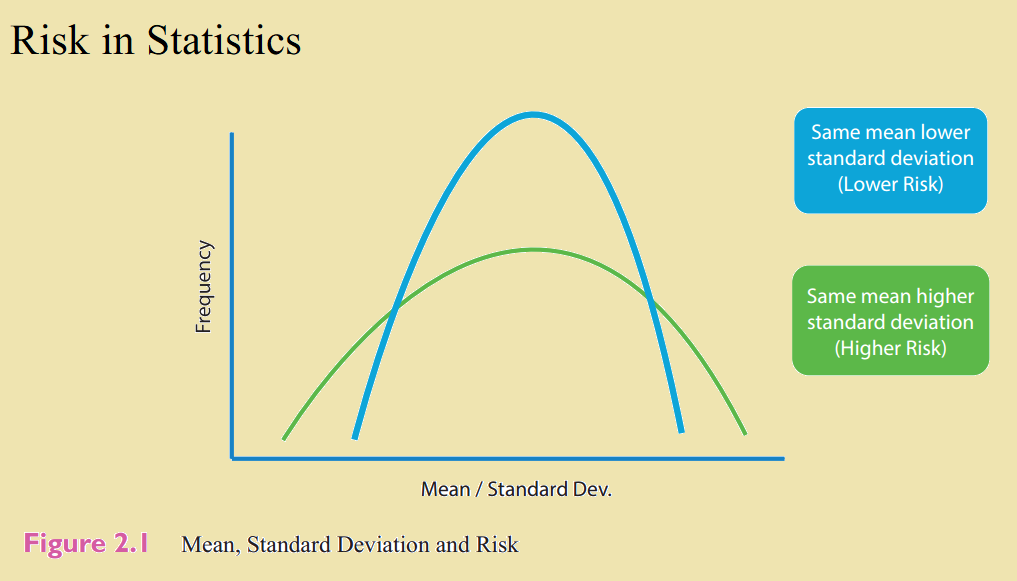 How one defines risk depends on what business he is dealing with. If the business deals with the real-sector such as manufacturing, the firm faces business risk. It can lose money when price of goods drop below costs or price of inputs increases dramatically. When an individual invests in stocks, he is also facing market risk as a collapsing stock market will eat away his capital. If he makes a loan or buys a bond, he faces risk of default or credit risk. These risks have something in common as they constitute potential losses.

This legal maxim asserts that profit can only be acquired by the taking of risk. The behavior is in direct contrast to riba where the taking of risk is absent from the receipt of surplus out of a loan. The practice of riba allows capital to increase without possibility of decrease, while al-bay allows capital to increase or decrease based on market conditions and systemic events. The former is therefore unjust in Islamic perspective while the latter is just and equitable. This principle requires one to risk his capital in order to enjoy gains. When an individual earns profit without risking his capital, it is likely the counterparty is treated unfavourably in the contract. For example, in contract of a sale, the trader is risking his capital by virtue of holding ownership of commodities. Failure to sell above cost price will mean losses and capital depreciation to the trader.

While giving and receiving of riba is prohibited in Islam, risk behaviour has not received adequate attention by Shari’ah scholars at the supervisory level relative to the law of contract in fiqh muamalat. Hence, it is not difficult to notice that Shari’ah principles in Islamic finance are confined to matters related to contracts (‘uqud). For example, valid contracts must be free from riba, gharar, gambling and impure commodities. Risk behavior in Islamic finance and contracts, in particular, has never received the attention it deserves, which is very unfortunate. The jurists have instead focus on risky sales under the pretext of gharar, which is again an element in contract agreement which contracting parties must avoid. However, gharar and ghurm are two distinct parameters in Islamic finance. The former is one form of unsystematic risk while the latter is a systematic risk.

Note: In video Lecture, I have discussed Gharar differently but in detail which is not available here.

Bank risk management in general is related to uncertainties in future outcome. But when the term risk is defined as gharar, one is referring to risk in contract where it deals with the uncertainties or ambiguities concerning the pillars (akrah) of contract. For instance, sales such as bay al-muzabanah and bay al-samak fi’l-maare banned in Islam because both contain gharar. Sometimes, gharar is called khatar, taken from the mukhatara sale. The purchase of life insurance policy is prohibited in Islam because it is said to contain gharar. When one sells something he does not own, ghararin ownership is said to exist in the sale agreement. As mentioned earlier, contracts containing ghararare declared null and void. Sales involving nonexistent objects, or the non-stipulation of terms of payments is invalid on grounds of gharar.

In a contractual agreement, gharar must be avoided because when it exists, there is a possibility that one of the contracting parties in the deal may lose out. What this means is that market participants must not allow ambiguities to exist when the contract is in effect. The legal maxim “harm must be eliminated” (al-darar yuzul) explains the basic justification for the prohibition of gharar in contracts.

Islamic jurists (fuqaha) have made it clear that any contract is deemed null and void when gharar is evident. When gharar in contractual obligations occurs, contracts can no longer be operative. The contract will become invalid and neither party shall receive legal protection when a dispute arises. For example, when a person sells an asset he does not own, or does so when the asset is not yet in his possession, there is a possibility he may fail to make the delivery. In this manner, the transfer of ownership rights cannot be executed as planned.  Gharar is caused by human choice but it can be controlled. Hence, it is one form of unsystematic risk. For example, a deliberate action not to declare a price during a sale can lead customers to pay more than they should. But gharar can be eliminated when the trader decides to put the price label. Selling fish in the water is a transaction fill with gharar about delivery and hence the true value of the sale. Using gharar to serve one’s end is destructive, which can harm others as it is close to deception (taghrir). Hence, gharar must be avoided at all costs as it will create dispute. According to Ibn Qayyim, when people quarrel and fight unnecessarily, they will be distracted from remembering God.

The harmful impact of gharar in contracts takes shape in the form of Shari’ah non-compliance risk. In the event where gharar is evident in the ownership of the asset, cancellation of a contract will produce adverse impact on bank earnings.

Elsewhere, Islam enjoins market agents to take risks in their business engagements. In fact, the Islamic legal maxim such as “no reward without risk” (al-ghurm bil ghunm) is invoked to invite people to participate in business involving both risks and reward such as al-bay, ijarah, salam, mudarabah and musharakah. Legitimate profit generated from commercial activities implicating elements of risk-taking is a virtue (mahmudah) in Islam.

Risk in business outcome (ghurm) can be explained by examining the nature of caravan trade before and after Islam in Mecca. The Qur’an described the caravan trade in the following verse:

“For the familiarity of the Quraish, their familiarity with the journeys by winter and summer let them worship the Lord of this House, Who provides them with food against hunger, and with security against fear of danger.”(Al-Quraish: 1-4) 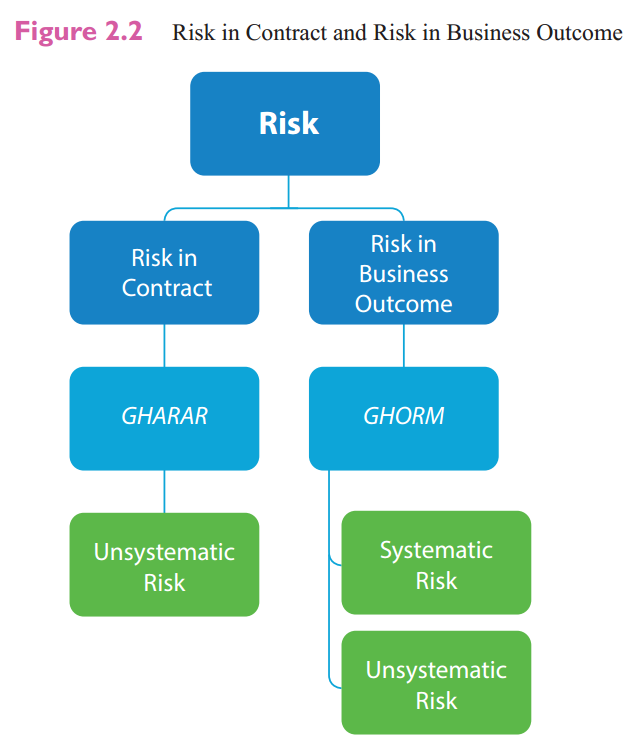 In essence, two types of commercial contracts can be observed in the caravan trade, namely mudarabah and al-bay. In the former, the Meccans are known to wait for the arrival of the caravan with full expectations of profit as they have invested their money in the caravan trade via mudarabah or al-qirad. Indeed arrival of caravans is a big occasion in the city. It is a festive occasion and people were excited about the caravan they have invested in. The caravan trade is by no means easy and smooth. The goods can be destroyed before reaching the markets. Sandstorms and sickness were common during the expeditions. Highway robbery and freak accidents may complicate the journey. These incidences are beyond one’s control. These are risks that caravan trading cannot avoid. Upon arrival at the destination, there is again no guarantee that the merchants can sell their goods at the intended price; hence in total the business outcome of the caravan trading is unknown. There is no guarantee that the merchants can recover their capital or make enough profit from the trade expedition.

When the Qur’an says’ “Allah allows trade but prohibits riba.” (Al-Baqarah: 275), it (i.e., the Qur’an), in principle, is enjoining a risk-taking or risk accepting attitude towards business. Risk-taking is a position taken by the business that exposes it to the law in nature that may be harmful to the organisation but it is pursued to establish fairness and justice as the outcome of business is unknown by man. For this reason, no counterparties should be put in a position to guarantee capital protection and receive fixed contractual profit. For example, in a trading business, the seller is risking his capital since the sale does not guarantee that capital is protected from market volatilities. The business can either make a profit or suffer a loss, hence capital is at risk. This is the essence of the “al-ghorm bil ghunm” and “al-kharaj bil daman”where profit is made by way of risking one’s own capital.

Based on the above, one can now distinguish ghararfrom ghurm.  Ghararis destructive while ghurmis constructive. Profiting from ghararis unjustified enrichment as it (i.e., gharar) leads to unfair and unethical dealings. On the contrary, profits created under the pretext of ghurm show the way to justice since these profits are made by way of mutual aid and cooperation (ta’awun).

As a business, al-baycan easily magnify risk behaviour in two ways. Firstly, al-bayas the business entity requires capital expenditure, which can be acquired using the mudarabah and musharakah system, thus amplifying the risk-sharing relationship. Secondly, the business activities the company is involved in can be as trader, manufacturer and service provider. This means that the company is dealing with final customers or end-users and thus, risk-taking behavior is more relevant here. While the company is taking risk with its capital in the effort of generating earnings, it does not share risks with the customer.

In the final analysis, risk-sharing and risk-taking are basically two sides of the same coin. The former involves mobilizing capital while the latter deals with the business operations that creates cash flows. This is the true meaning of al-baythat the Qur’an intended to convey as opposed to riba. When economies under financial turmoil are looking for an alternative to interest-based debt financing, embracing Islamic risk behaviour in both forms (i.e., risk-taking and sharing) can be the winning option. It is for this very reason that Allah has permitted al-bay but prohibits riba. 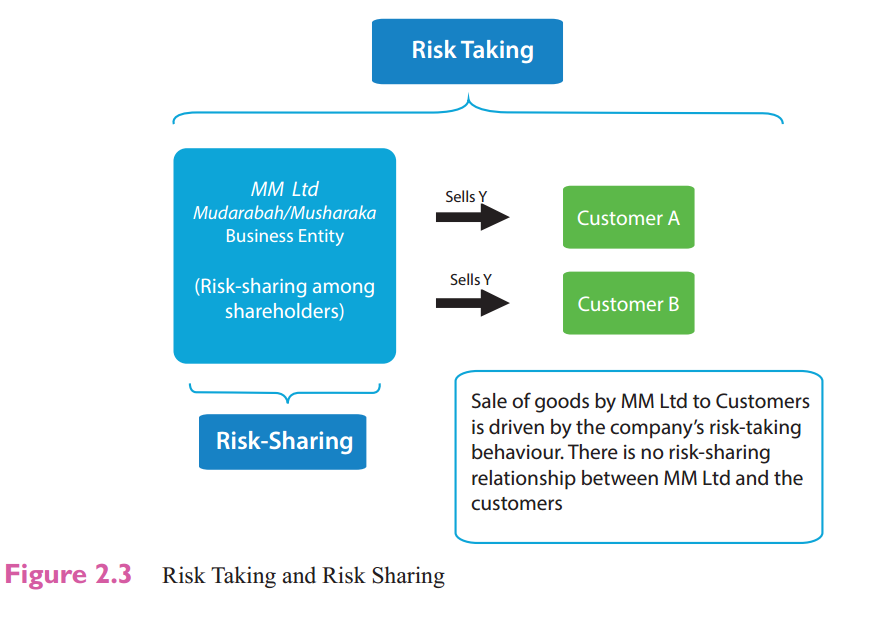 While Islam enjoins people to take risk, the people will take risks based on their respective risktolerance attitude. These are:

If capital is preserved but the owner of capital demands a contractual return from its use, this behaviour is tantamount to riba. However, risk-avoiding behaviour meant to protect capital is allowed in Islam as long as it does not contract a fixed return. This is possible under the contract of wadi’ah yad dhamanah. Risk-avoiding behaviour that runs against the principle of “al-ghonm bil ghurm” is condemned in Islam. Hence, any contract that guarantees capital protection and fixed contractual returns is prohibited.